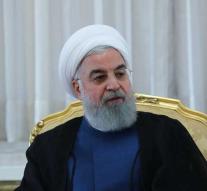 teheran - Iranian President Hassan Rohani says he is open to talks with the United States, but they have to 'first build bridges' to restore contact.

Rohani said there were good contacts with Washington before, but the Americans have cut it off. US President Trump has turned away from the 2015 international agreement to resolve the lingering conflicts about Iran's alleged plans to make nuclear weapons.

Trump has said to be willing to engage with the Iranian leadership at all times. The spiritual leader of Shiite Iran and actually the man who has the last word, the Ayatollah Khamenei, has explicitly said that there should be no more talks with Washington. Rohani does not seem to take that literally. Next month is the annual General Assembly of the United Nations. American and Iranian ministers would then meet in New York.