Home / World / President: I bring all of you 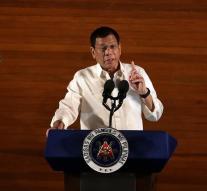 - 'You whore sons, I bring all of you. '' This seems to be a threat of a terrorist or a criminal but they were words of President Rodrigo Duterte of the Philippines Friday. The head of state gave thereby once again its campaign against drug criminals attention.

Since taking office in late June were more than four hundred suspected drug traffickers were killed at the hands of third parties.

Duterte announced during his presidential campaign already to embark on a relentless fight against drug criminals. With his statements Friday, he made clear the criticism of human rights activists in addition to obey and keep going full throttle.,, If you have public functions, military, police or mayor, then you are first to act, '' said Duterte.


Duterte was previously mayor of Davao. In that city over a thousand suspected drug criminals on the streets or murdered in their home.