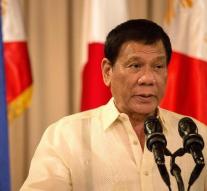 manila - Philippine President Rodrigo Duterte wants his daughter to follow him as head of state. 'I can not imagine a better candidate than her could be the next president,' said Duterte in the newspaper Philippine Star Sunday. The elections will be held in 2022.

The 39-year-old Sara Duterte-Carpio, a lawyer, is currently Mayor of Davao City. Ever her father was too. Duterte is highly controversial because of his hard actions against the drug scene in the Southeast Asian island state. His daughter is considered as equally strict.

Against his son Paolo, who himself was accused of being involved in a drug environment, he said earlier this week, 'If my children are involved in drug affairs, they must die so that people can not blame me for anything. 'He also told his son.