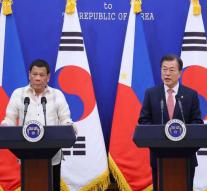 manila - The Filipino president Rodrigo Duterte has been discredited because he kissed a woman during a visit to South Korea. The incident happened during an event for Filipino workers in South Korea, where Duterte gave a speech.

He called a woman from the audience onto the stage and then asked her to kiss him. The president stated that it was only a joke to entertain the public.

Women's rights activists in the Philippines called the incident a perverse way to hunt down female opponents. Philippine women's movement Gabriela refer to the abuse of power of a woman-hostile president. The kissed woman herself said in an interview that it meant nothing to her and the president.

The images of the kiss are very popular on social media. Many Filipinos stand behind their president and call it an innocent way to entertain the public.