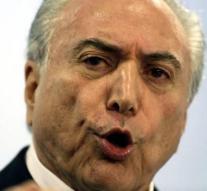 brasilia - Brazilian President Michel Temer refuses to resign, even if he is charged with the Supreme Court. 'I do not resign. Turn me off if you want, 'said a controversial Temer published in a Monday interview with the Folha de S.Paulo newspaper.

The president stated in the conversation that stopping in his eyes is equal to a blame. Temer has been hit by a sound recording. It would be heard how he agrees to pay silence to Eduardo Cunha, the former parliamentary president who is in prison because of corruption.

Temer denies the accusation. There would be mess with the sound recording to put him in an evil daylight. Temer announced the coming week's political power by presenting 'important proposals' to parliament. 'I'm not damned,' he said to the newspaper.