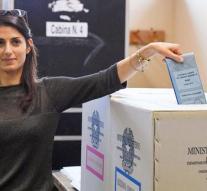 rome - Rome gets its first female mayor. Virginia Raggi of the Five Star Movement (M5S) won endorsed the second round of the mayoral elections in the Italian capital.

The M5S hits a grand slam, because the protest movement by former comedian Beppe Grillo may also provide the first citizen of Turin. One consolation for the center-left PD Prime Minister Matteo Renzi, the Rome and Turin must therefore leave it to the M5S is that it holds the power in the financial capital of Italy, Milan. In the northern city of Bologna continues the PD to power by defeating more traditional center-right candidates.

The result is a major breakthrough for the Five Star Movement, which is opposed to the widespread corruption in the country.,, A new era begins with us '' said Raggi, a 37-year-old lawyer, which 67 percent of the vote won in the second round.,, We will work to restore legality and transparency in the institutions of the city. ''