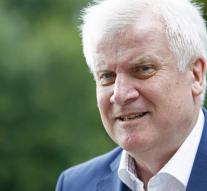 - Islamic terrorism has now also arrived in Germany and politicians the concerns of citizens must take away their security and immigration. That said Prime Minister Horst Seehofer of Bavaria Tuesday.

,, Every attack, every act of terrorism, there is one too many, 'said Seehofer at a news conference. The people are full of fear and want answers and political leaders, not endless talk, he said.,, It's time for action by the Federal Government of Germany instead of perspective, 'he added.

Through a series of attacks in Germany have come since July 18 eleven people dead and dozens injured. It has further increased public discontent over the open door policy of Chancellor Angela Merkel regarding refugees. Last year, more than one million migrants in Germany, many from Afghanistan, Syria and Iraq.