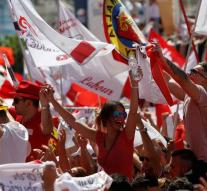 valletta - The Maltese Prime Minister, Joseph Muscat, can make up for a second term of five years after early elections. His Labor Party achieved the absolute majority in parliament with 55 percent of the votes.

The 43-year-old Muscat wrote the early elections last month, one year earlier than intended. Opposition leader Simon Busuttil of the Nationalist Party demanded his resignation, because Muscats would be involved in shady business transactions and a minister would have taxed through trust offices.

The 400,000 inhabitant of Malta is the smallest member state of the European Union, now holding the six-monthly presidency.