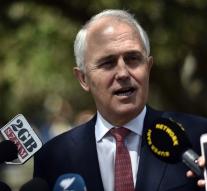 sydney - Prime Minister Malcolm Turnbull has knighthood in Australia abolished again. The naming of ' Knight ' and ' Lady ' was only short-lived. The ability to reward people with knighthood was in fact, after nearly thirty years of absence, until 2014 reintroduced by former Prime Minister Tony Abbott.

The royalist Abbott appointed Britain's Prince Philip then a Knight in the Order of Australia. That led to much criticism. Abbott was not even supported by his own ministers. In the end, only five people knighted.

Turnbull takes the knight no longer of this time and calls the Monday inappropriate in a modern Australia, writes The Sydney Morning Herald.