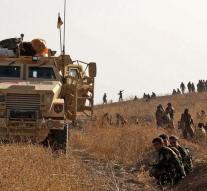 - The offensive against Islamic State in the northern Iraqi city of Mosul faster than planned. That Iraqi Prime Minister Haider al-Abadi Thursday informed via a video link.

' The forces snatch faster to the city than we expected and faster than we '' have programmed into our campaign, al-Abadi told representatives of several countries met in Paris to consider the future of Mosul.

French President Francois Hollande warned that there are indications that IS fighters from Mosul are fleeing to the IS stronghold Raqqa in Syria. He said that everything possible must be done to prevent them from regrouping there.