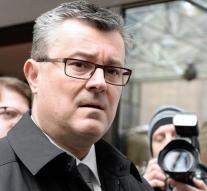 zagreb - The acquittal by the ICTY Thursday of Vojislav Seselj is not well received in Croatia. The prime minister of that country called the verdict,, scandalous 'and a defeat for the UN tribunal.

,, This verdict is shameful. It is a defeat for the Hague Tribunal and the prosecutors, 'Tihomir Oreskovic said during a visit to Vukovar, a town in eastern Croatia during the war in the Balkans months was besieged by Serb paramilitaries.