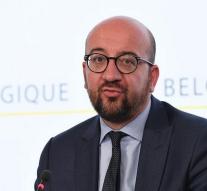 brussels - Belgium does not intimidate by terrorists. This stressed Prime Minister Charles Michel on Wednesday morning after a special meeting of the National Security Council. 'We will defend our freedom, democracy and the rule of law,' said Michel.

The Security Council met in response to the deliberate attack on Tuesday evening at the Brussels-Central station. Soldiers shot a man after a blast in the hall. Michel had a special word of thanks for the soldiers. ' They have been particularly cold-blooded in dangerous conditions. '

The terrorist level does not go up, but there are additional security measures in the coming days, the Prime Minister announced. Michel did not want to give details. 'We aim to do everything we can to strengthen our security and stay alert. '