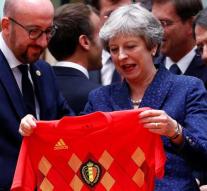 brussels - The Belgian Prime Minister Charles Michel has given his British colleague Theresa May a shirt of 'his' national football team, nicknamed the Red Devils. He did so in Brussels just before the start of an important EU summit. The shirt is to the great laughter of the other EU leaders and May itself number 10, the house number of Mays official residence in Downingstreet in London. England and Belgium play against each other on Thursday-evening.

Because both teams have already qualified for the next round, there seemed to be little tension between the 'competing' EU leaders.

Prime Minister Mark Rutte and the Luxembourg Prime Minister Xavier Bettel joined their Belgian counterpart and co-liberal. The Benelux Prime Ministers each hung a supporters scarf and jointly took pictures. Michel put it on Twitter with the text 'The Netherlands and Luxembourg will soon support our devils!'

The competition starts at eight o'clock, shortly after the 28 leaders have started their work dinner on migration.