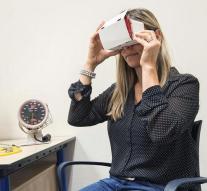 the hague - The Hague Center Medical Center (HMC) is the first hospital in the region to provide information on a planned cesarean section in virtual reality.

A folder is no longer enough. With special Nose VR glasses, pregnant women in 3D can get an idea of ​​how a caesarean section works.

'It's a special experience,' says HMC gynecologist Corla Vredevoogd. 'The advantage of the VR glasses is that women are more relaxed to enter the surgery. Anything that can add something to a positive experience we get to be a hospital. The childbirth must be a party. '

With the VR glasses on, the patient is a viewer of a planned cesarean section from beginning to end. 'You are in the operating room and can look 360 degrees around you', writes Vredevoogd.

'The operation itself does not see you. So it's not scary and there's no blood to see. Well, you can see how the anesthetist puts a headache, because many women are afraid of it. Research has shown that there is less fear after seeing the film. '

Although HMC has recently used the new way of providing information, the first reactions are positive. The 3D glasses are developed for women who get a planned cesarean section, but in principle all pregnant women who are interested can report. The chance of a caesarean section is always there.

'One in five women gets a (hurdle) caesarean section,' says Nursing Consultant Monique Boon of the outpatient obstetrics clinic. 'The VR glasses are really a valuable addition,' she believes. 'If you know what's going to happen, you're better prepared,' replies Vredevoogd.

The 3D information film is provided via HMC Bronovo and HMC Westeinde locations and there is also an English version. 'At HMC Bronovo there are many expats, so there really was a need,' says Boon.

The glasses can also be taken home so that the whole family can watch. Via the app of initiator Infor-med, the video can be downloaded to the smartphone, which can then be moved into the glasses.

HMC is the third hospital in the Netherlands that uses the virtual reality information film. The Máxima Medical Center in Veldhoven and Rijnstate (Arnhem) also use the new technique.

Also in preparation for other operations, the VR glasses are a possibility.

Vredevoogd does not rule out the future of virtual reality in the Hague countries Medical Center.