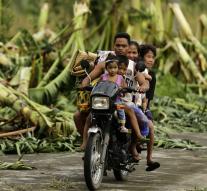 - In large parts of the Philippines is dark. The powerful typhoon Melor, many electric cables snapped in the central part of the island group and is a power failure.

The typhoon came Monday for the first time to land on the island of Samar. According to unconfirmed reports three people were killed there.

Melor, according to weather experts winds reaching 140 kilometers per hour and people must take account of floods and tidal waves. However, the storm is expected to decrease in strength as the Tuesday crossed the central part of the Philippines. The capital, Manila, on the island of Luzon, is probably also affected.

Nearly 800,000 people have already abandoned their homes and taken to safer areas. In addition, many schools and offices have progressed robbed. Dozens of domestic flights have been canceled, and services of ferries.