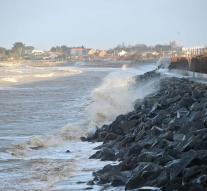 la rochelle - In the southwest of France is Saturday in 250,000 households power failed because of a violent storm. That is especially the department of Charente-Maritime stricken, French media reported. In the Bordeaux region the power supply broke down in many places by fallen trees or power poles. working energetically to the recovery.

The storm is described as exceptionally heavy by local media, but the damage seems to fall with it Saturday afternoon. Dozens of roads are blocked and there are trains dropped by fallen trees, but there have been no personal injury. The damage appears to be limited to goods.