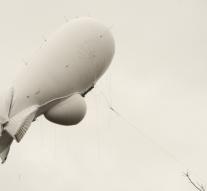 - An American military airship which had gone adrift, causing blackouts in 30,000 households. The zeppelin-like monster hit unknown reasons apart from its anchors in the state of Maryland, the US east coast, and landed after three hours in the neighboring state of Pennsylvania.

The approximately two kilometer long chain that dragged the monster, hit cables of electricity pylons piece. The approximately 60-meter-long airship is unmanned and should normally detect an enemy missile attack.

Two F-16s were deployed to monitor the colossus. Authorities struggled for hours asking how they could get the airship safely on the ground. Eventually it landed itself in rural areas. No injuries were reported.