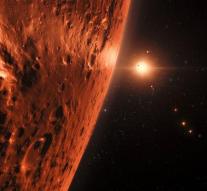 paris - Some planets that rotate around another star may have water. Spatial telescope Hubble has found traces of it. In two of the planets, the water has probably disappeared, but on the surface of probably three other planets may be water.

It's about planets that turn around the star TRAPPIST-1. It stands in the zodiac sign Waterman in 39 light-years distance from the earth. For space terms, that's around the corner. The star has seven planets. Scientists already had the impression that some of them might be alive.

In recent years thousands of so-called exoplanets have been discovered, planets outside our solar system. In addition, there are thousands of potential planets, whose existence is not entirely certain. But scientists just started searching and counting. The actual number of exoplanets is probably much higher. There are hundreds of billions of galaxies in the universe. And our system, the Milky Way, has only hundreds of billions of stars. And probably almost all of the star planets run around.