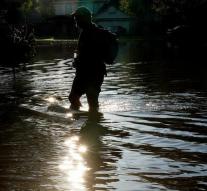 miami - Harvey has not yet grown up, but the next threat to North and Central America is already on the Atlantic Ocean to the west of the Cape Verde Islands. The American National Hurricane Center (NHC) in Miami announced on Thursday that Irma has now grown sufficiently to become the fourth hurricane of the 2017 season.

This probably happens on Thursday night, after which Irma can become a very dangerous copy the following days. Irma is still a little 3000 kilometers east of the Caribbean and can arrive there next week. The wind speeds have increased to 155 km / h.