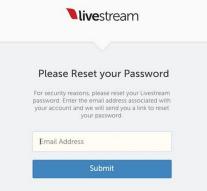 - In an attempt to hack the servers of streaming service LiveStream possible users of data captured. All users have received an email stating precaution is advised to change their password.

Although much is unclear about the hack, the service notifies users that there may be stolen personal data such as names, encrypted passwords, email addresses, phone numbers and birthdates. On the affected server, no payment data would be stored.