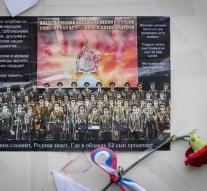 moscow - The sinking of the Russian military plane Sunday may have been caused by faulty valves in the wings. That has shown preliminary examination of one of the black boxes. A member of the emergency response in Russia, which said Wednesday.

With the valves behind the wings, fall and rise is controlled. It may be that the pilots were put through the defect in the wrong and have acted wrongly.

Wednesday it was announced that the second black box was found from the military plane Sunday in the Black Sea crashed. The first box of flight data was already traced.

Researchers had shown earlier that the crash was possible due to a technical failure or pilot error. The device contained no traces of explosives were found. As for salvage not the authorities broke up an attack.

The plane crashed shortly after take off from the airport of Sochi. All 92 occupants of the plane were killed. On board the Tupolev-154 included dozens of members of the Alexandrov Ensemble, a famous choir of the Russian army that would occur in the run-up to New Year for Russian troops in Syria. A well-known doctor, Elizaveta Glinka, who belongs to the Human Rights Advisory Council President Vladimir Putin, was in the unit.

Of the more than 1500 pieces of wreckage which are localized, rescue workers had approximately six hundred Wednesday hoisted out of the water.