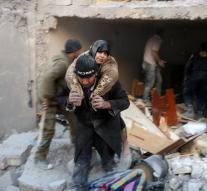 - In an airstrike in eastern Aleppo Tuesday chlorine would be used as a weapon. Helicopters were barrels of the chemical substance have dropped in the neighborhoods al-Qatarji and Dahrat Awad, some people would therefore have difficulty breathing. It reports the Syrian Observatory for Human Rights.

According to the monitoring authority at least four dishes bombs would hit the area in Aleppo and caused a strong smell of chlorine. Medical sources have confirmed to the observatory that it is chlorine.

Earlier on Tuesday advised the Syrian army citizens to stay indoors and not to come near areas where heavy fighting.