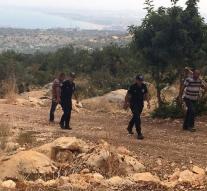 silifke - At the search in the mountains at Silifke yesterday, traces of blood were found. That is what the main commissioner of the corps reports to De Telegraaf.

The tracks are safeguarded and brought to a forensic desk, where it is important to know whether it's really about blood. The tracks were on a stone, all that the Commissioner wanted was lost.

Spectators again yesterday recounted a hilly area where Joey Hoffmann (21) was last seen. He has been missing since 8 July. The search for special dogs did not yield anything and no results were made today.

Saturday is therefore being searched again in the morning. 'The dogs can not do their work in the worst heat, hence everything happens early in the morning,' said the chief commissioner.

Yesterday there seemed a breakthrough, when an excavator suddenly drove to the area where Joey camped with traveling companions Bjorn and Derya Breukers. That excavator was thrown up because two detective dogs became independent of each other in a certain place on a scent. After some excavation and detective work, the alarm was detected. 'The only bones we found were of a dead bird', according to the chief commissioner.

Slowly, the area sought is expanded. During the past week, the police focused on the route that Bjorn and Derya said downwards, and the campsite, as well as other areas from tomorrow. 'Furthermore, the other research continues. If necessary even months. ''

Sunday, when everything goes according to plan, a Dutch team will start on the rocky mountain slope at Silifke. Three dogs and three guide dogs from Signi Search dogs arrive tomorrow evening and want to start the same in the morning.

The chief commissioner did not yet know about the arrival of the dogs, although Signi emphasizes that the Turkish police have been informed. 'If necessary, we can arrange shelter for them and the dogs. For us it is important that we find Joey, so all help is welcome. ''