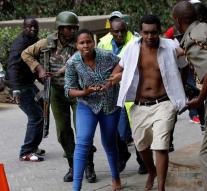 nairobi - In a possible attack on a hotel and office complex in the Kenyan capital Nairobi, two explosions and several shots were heard.

'We are being attacked,' says a witness in the complex against Reuters news agency. Local TV stations show images of smoke from the environment.

Why exactly is shot is not known. Police chief Philip Ndolo has announced that the area around the Dusit hotel has been shut down.