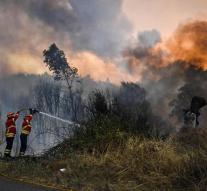 More than 2100 firemen are working to fight the 170 fire brigades. Especially the Abrantes area is heavily affected, 130 kilometers northeast of Lisbon's capital. There were some, especially older residents in panic during the evacuation of the villages. Many homes ravaged by the fire threatened. The house of an eighty-year-old resident was destroyed. The roads are closed by the fires around them.

The mayor of Abrantes, Maria do Céu Albuquerque, told RTP news channel that there is 'one dangerous fire place that will cost us a lot of work. '

Portugal is experiencing the heaviest forest fires this year since 2005, with the fatal inferno in June with 64 victims as the lowest point.