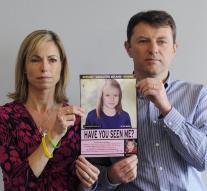 amsterdam - The missing girl Madeleine McCann no longer lives and is cremated after her death. That claims the controversial police chief Goncalo Amaral, who was involved ten years ago in the search for the missing British toddler.

Amaral made the remarkable verdict on Portuguese television. Tomorrow, May 3, it is ten years since Maddie disappeared from the cottage in the Portuguese city of Praia da Luz.

According to the former agent, in the night of her disappearance, three people had entered a church with a box containing the remains of Maddie. A British woman would be crushed there later. 'The remains of the girl have stopped at the furnace at the same time,' said Amaral. According to Portuguese, Kate and Gerry McCann, the parents of the girl, would keep information. They had the keys of the church, says Amaral.

The McCann's spokeswoman last week said they would still be able to find their hope from their daughter after all those years. The search for the girl has now cost 13 million euros. Last month, the British police released additional money so that the investigation could be extended for another six months.

The investigation into Madeleine's loss led to, among other things, 1338 statements and the gathering of 1027 evidence, but did not make any sense of the eviction of disappearance. An Australian television program recently claimed groundbreaking knowledge about 'Maddie'.

This breakthrough, however, appears to be continuing. In the broadcast, Amaral also showed that he still suspected McCanns, according to The Sun. He thinks they lied and suspect that the couple put the kidnapping in scene.