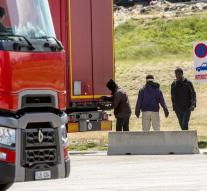 - The shipping industry has been shut down entirely in the night from Friday to Saturday in the port of Calais, northern France because applicants were in the water. They tried to board the car ferry to the British Dover, the Walloon broadcaster RTBF reported on the authority of initiates.

The ferries that were en route from Dover to Calais were anchored outside port, the sources RTBF let know. The shipping was halted at the port to find the swimmers and get out of the water. On the quest took the rescue team, navy, customs and some fishing boats share.

One of the asylum seekers did on their own to reach the dock again. Another is safely brought ashore by a lifeboat.


Around Calais bivouac thousands of asylum seekers hoping to make the crossing to Britain.