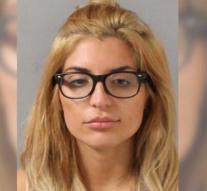 nashville - The governor of a Porsche in Nashville has shot a homeless man because he asked if she could move her car. The wanderer was sleeping on the street when he was disturbed by the loud music that came out of the car.

26-year-old Katie Quackenbush told the court that she had 'loosed some warning shots'. That happened on August 26th near Music Row.

Gerald Melton, 54 years old, suffered a critical wound and had to be admitted to hospital. Police told Gerald they had a conversation that escalated rapidly. After Katie had shot him, she walked into her luxury car and drove them away.

Katie, mother of a 5 year old boy, had to report to the prison this week. According to her father, Jesse Quackenbush, her daughter opened the fire because she felt threatened. At Tennessean he explained that Melton threatened to kill Katie and her friend, who was also in the car.

'She closed her eyes and then shot twice. But they were warning shots because they did not focus on him, 'the father added. His daughter would have told him that it did not seem that the man was hit.

On October 6th, Katie must be present. For the time being, she is free to pay by paying a deposit of more than 20,000 euros.