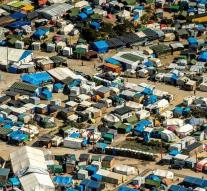 - The number of people in the refugee camp in the northern French port of Calais has increased again this summer clearly. According to a new census adhere to the 'Jungle', as the area is called, certainly 6900 people, announced the prefecture of Pas-de-Calais Friday.

So many people were there since the opening of the current camp in the spring of 2015 yet. Aid organizations estimate the number of occupants and later speak of more than 9,000 people.

Authorities do for months to reduce their best to the people in the cabins- and tent camp on a vacant lot in the port area. It is a gathering of people hoping to cross illegally into the UK. In connection with the large influx, the port and the Channel Tunnel made less accessible in the past year.


In autumn, the authorities counted 6,000 people in the camp. Thereafter, the numbers went down, to a small 4500 in June.