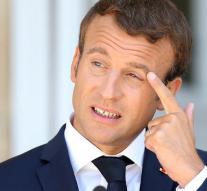 paris - Three months after his arrival, only 40 percent of the French are satisfied with President Emmanuel Macron. His popularity has fallen further, according to the monthly survey of Ifop's research firm for Le Journal du Dimanche. In July, 54 percent saw it in him.

Macron is doing worse than its predecessors. François Hollande, after the same period, still supported by 54 percent of the population and Nicolas Sarkozy by 67 percent.