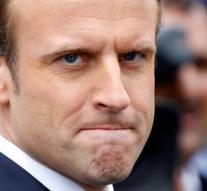 paris - The French president Emmanuel Macron, admitted in May, said in French's opinion. In a newspaper published in the Journal de Dimanche, 54 percent of the respondents have confidence in 39-year-old pro-European liberal Macron. In June this was 64 percent.

It's not a dramatically bad score, but a noticeable decline in just three months of governance. In May, ifop opinion poll 62% of respondents were satisfied with the newcomer Macron. The decline in short-term to 54 percent is the second largest since Ifop in 1958 began to measure the popularity of the head of state.

Only President Jacques Chirac fell deeper in polls in the first three months of his presidency in 1995. He was 59 percent satisfied with his election at 39 percent three months later. He was also re-elected in 2002.