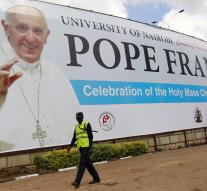 - Pope Francis fly Wednesday to Africa, where he touches three countries over six days. During his first visit to the African continent, he is a guest in Kenya, Uganda and the Central African Republic. The trip will focus on two things: faith and the extensive security measures.

The first goal is Kenya. From the landing Wednesday in Nairobi there are 10. 000 police officers ready. Kenya has some experience in receiving dignitaries. Last July, President Obama visited the country. During Obama's visit the authorities tried to keep the population at home, this time the reverse is the case. The government would like to see people cheering along the streets.

Then the trip to Kampala goes. The Ugandan government also employs approximately 10 000 police officers ready. Francis is among other things in a mass for two million people.

In both Kenya and Uganda fearing the safety authorities for the practice of the pope to go among the interested parties, which protective measures considerably more difficult. Kenya was recently repeatedly targeted by violent actions of Islamic terrorist group al- Shabaab.

The Vatican fears, however, undoubtedly the most for the visit to the Central African Republic, a country that since 2013 has been plagued by civil war. The pope Step into soil which is contested by several groups. The republic is the spectacle of violence, poverty, inequality and intense religious disputes. Nevertheless, there is a ride in the open popemobile through the capital Bangui planned.

A Vatican spokesman denied by the British newspaper The Guardian that Francis will certainly wear a bulletproof vest. Despite extensive security, the Vatican sent ahead his own safety experts to study the situation on the ground. Paris has warned the Vatican for the unsafe situation in its former colony.