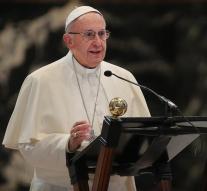 vatican city - Pope Franciscus believes that a third country must be appointed to mediate in the conflict between North Korea and the United States. Norway seems to be a good idea for him, so he announced Saturday in the plane on the way back from his official visit to Egypt.

According to the church presidency, the situation has 'overheated', causing the world to be at risk of a devastating war. Franciscus fear that then a 'proper part' of humanity will be destroyed.

According to the pope, Norway is 'always willing to help' but is one of the countries that could mediate. 'But the path is the path of negotiation, a diplomatic solution. 'Franciscus further claims that the United Nations must restore their leading position because it has been' diluted '.

The Pope also announced that he was ready for a meeting with US President Trump but he had not received a Washington request yet.