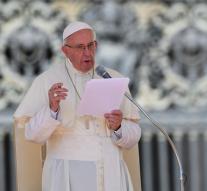 - Pope Francis sympathizes with the people in the middle of Italy, Wednesday night was hit by an earthquake. He canceled a planned speech and prayed for victims and survivors.

,, When I was the mayor of Amatrice heard that his place no longer exists and that there are children among the victims, I was heartbroken, '' the pope said to the tens of thousands of listeners to the audience in St. Peter's Square in Rome had come. He expressed his great sorrow and closeness,, '' out.