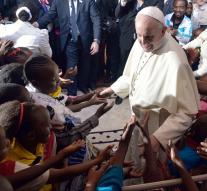 - Pope Francis on Friday visited a slum in the Kenyan capital Nairobi. He named the neighborhoods for the poorest " wounds " by a wealthy and powerful elite. He called on African governments to do more to alleviate poverty.

The pope is known as an advocate for the poor and that even in his own sober lifestyle. Before his election in 2013 he was already known as the bishop of the slums, because he often visited the poor in Buenos Aires.

Kenya is the first country he visited in Africa. Later he will go to Uganda and the Central African Republic.