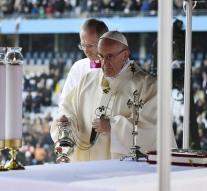 - Pope Francis has on the final day of his visit to Sweden commended the asylum policies of the Scandinavian country. The church leader was wearing Tuesday in the football stadium of Malmö a mass for the small Catholic community, mainly consisting of refugees and migrants.

The pope called them 'blessed' to be so accommodating included in an all but religious nation. Sweden had last year tens of thousands of asylum seekers far, unlike many other European countries.

Francis was a few days in secular Sweden for a meeting with Lutheran sympathizers to commemorate the 500th anniversary of the Reformation. This Catholic-Protestant rapprochement was described as historic, though it remained unclear how far will a possible collaboration. The representatives of the two religious communities agreed to intensify ecumenical efforts.