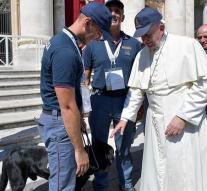 rome - Pope Francis on Saturday met with aid workers and rescue dogs that were deployed after the earthquake in Italy. The pope received a team of rescue workers at the St. Peter's Square, the Italian news agency ANSA reported. Here he petted the dog, Leo, who had taken away a girl alive under the rubble with his team.

The rescuers handed the pope a cap with the logo of the police, which he set up. Labrador Leo was openly praised after his efforts in the rescue efforts from the earthquake. Earlier this week he was presented to Prime Minister Matteo Renzi and Chancellor Angela Merkel.