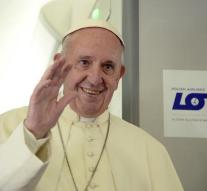 - Pope Francis on Tuesday appointed the long-awaited committee to study whether women can be deacons and which can form a historic overture to another place for women in the Roman Catholic Church.

Inside the church of Rome may preach ordained deacons, reading the Gospel and communion distribute during mass. They may also play a role in baptisms, marriages and funerals. But before going to diminish in the Eucharist and confession is only reserved for a priest.

The Argentine pope has now put a thirteen-member committee to work that needs to study the diaconate for women 'especially in light of the early times in the church' and in which women played role.


Chairman of the committee, according to Vatican Radio Archbishop Luis Francisco Ladaria Ferrer, secretary of the Congregation for the Doctrine of the Faith. The commission includes six women. Among the men, there is Bernard Pottier, of the Institut d'Etudes Théologiques' in Brussels and a member of the International Theological Commission.