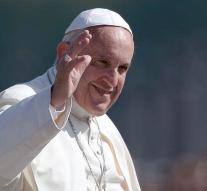 - Pope Francis asked to respect humanitarian law in his country in a personal letter to President Bashar al-Assad of Syria. Only way to defend civilians and aid can reach the endangered people, the Pope writes.

The letter was delivered to Assad by the papal nuncio in the Syrian capital Damascus. The Pope writes in his letter that Assad and the international community to end the violence. It condemns all forms of extremism and terrorism, regardless of which camp they come.

The civil war in Syria began in the spring of 2011 and continues. Estimates of the number of dead vary, but the number is often called 300. 000.