Home / World / Pope is wearing a name band of refugees 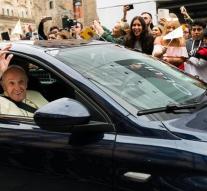 bologna - Pope Franciscus has called on governments to do more for migrants on Sunday. He did that during a visit to a shelter in Italy. The church vicar demonstrated there a plastic name band that he had received from an African asylum seeker.

"Many people are afraid of you, while they do not know you", Franciscus held present migrants. "Therefore, they think they have the right to judge you and you." The pope also showed respect for asylum seekers "who never arrived because they were swallowed by the desert or the sea."

Franciscus visited a reception center in Bologna, where about a thousand asylum seekers are housed. They include containers. In Italy, hundreds of thousands of asylum seekers have arrived in recent years.

The church council called governments not to see migrants as enemies. "If we look at our neighbors without mercy, we run the risk that even God will see us without mercy," he warned.