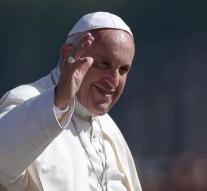 - Pope Francis on Sunday announced that next month he will appoint seventeen new cardinals. Thirteen of these clerics are younger than 80 years, which means that they can take in due part in a conclave. During such a closed meeting the next leader of the Catholic Church is chosen.

The pope made the surprise announcement Sunday during his weekly speech. He told the prelates that are coming on November 19 during a ceremony cardinal five continents.