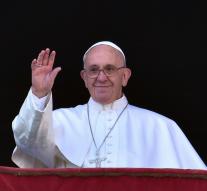 rome - Pope Francis has sued Friday in his Christmas message of peace in the Middle East. Right where Jesus came into the world as incarnate Son of God, go tensions and further violence, said the head of the Catholic Church in his speech from the balcony of St. Peter's Basilica in Rome.

Can Israelis and Palestinians to resume their dialogue and to reach an agreement that allows both nations to live in harmony together , said the Pope.

The pope also expressed hope for an early end to armed violence in Syria. Equally important, he mentioned that a national unity government in Libya is supported by all. The Pope also recalled the victims of the terrorist attacks.