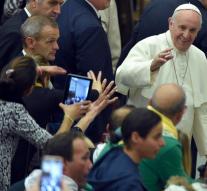 rome - Pope Francis has to integrate the Roma and Sinti recalled more in society, "You are themselves the protagonists of your present and future," he said Monday in Rome during a speech to 7,000 gypsies.

Groups Sinti and Roma last weekend made ​​a pilgrimage to Italy from about thirty countries.

Gypsies can contribute to the welfare of society as they as anyone who respects the laws and fulfills his duties, the Pope said. He called his listeners especially to send children to school. People without education programs have a problem to enter the labor market.

Francis know them under the difficult conditions of the Roma and Sinti sometimes life. " We do not live to see tragedies where children die of cold or heat, or plaything of unscrupulous characters. " The time has come for the centuries of prejudice and mistrust between Gypsies and others are taken, said the Pope.