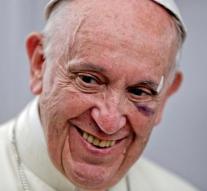 vatican city - If humanity does not address climate change, then it goes down. The current series of hurricanes that harass the Caribbean and the United States show the need for action.

Pope Franciscus said that aboard his plane while returning to Italy. The Catholic Church was a few days in Colombia.

Who ignores the cause of climate change will eventually be convicted of history, he said. With this, the pope touches the United States decision to deduct the Paris Convention of 2015.

'You can clearly see what happens if we ignore the effects of the climate and the advice of scientists on how to tackle them,' said the Pope. Global warming is caused by human activity. 'We all have our responsibility. Also politicians. '

About President Trump, who launched the US from the treaty, Francis said: 'If anyone doubts about the causes of the warming, then he has to consult scientists. They are very clear about it. '