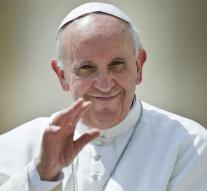 Four of the clergy, the Vatican said Friday, aged eighty years. This means that they have no right to vote in the election of the next pope.

The appointment of the papal nuncio in the Syrian capital Damascus is regarded as a surprise. The archbishop concerned Mario Zenari told Vatican Radio that his promotion should be construed as a sign of solidarity with Syria and its people.

On Sunday, the Pope concludes the Holy Year which began in December 2015.