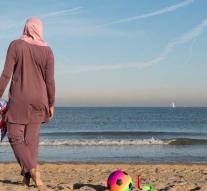 ghent - Two swimming pools in the Belgian town of Ghent are not allowed to keep women out of burkini. The court decided on Friday. In case of a ban, the swimming pools would be guilty of discrimination.

Boerkinis and other covering swimsuits are not allowed in the two swimming pools for 'hygienic and safety reasons'. Scientific research has shown that a swimsuit that covers the entire body is no less hygienic than other swimwear. That is how the NOS reports.

Muslim women who wear a burqini for religious reasons are disadvantaged by the swimming pools. That is what the court says.

Ghent appeals against the ruling. The swimming pools have to adjust their rules and the Muslim women who have stepped to court receive compensation. In addition to Ghent, a boarder ban in swimming pools also applies in Antwerp. The board says in a reaction that the city is sticking to that ban.

In the Netherlands swimming in boerkini is allowed.