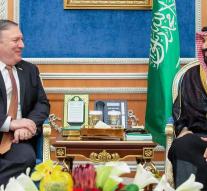 riyad - The American minister of Foreign Affairs, Mike Pompeo, also had a conversation with his son, crown prince Mohammed bin Salman, after a meeting with Saudi king in Riyadh. Pompeo traveled to the region because of the disappearance of the Saudi journalist Jamal Khashoggi. He lived in the US and disappeared at the Saudi consulate in Istanbul at the beginning of this month.

The crown prince is regarded as the most powerful man of the Saudi's extensive clan. He was installed by his father as the heir to the throne last year, after he started the current war in Yemen as defense minister. The succession from father to son is not common in this absolute monarchy.

Mohammed bin Salman has pulled the power with a hard hand. He likes to see himself as a leader who modernizes the country, but is notorious for his dictatorial action where every criticism is nipped in the bud. Many observers see the crown prince's hand in the disappearance of Khashoggi.