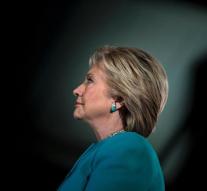 - Hillary Clinton gets in a poll published Monday by ABC News and the Washington Post the support of 47 percent of respondents. Her rival Donald Trump gets 43 percent. In a poll of Bloomberg Politics Selzer \u0026 Company, the Democratic presidential candidate Monday also in the lead, with three points ahead of the controversial Republican candidate Trump.

The results of the polls is not much different from other recent polls. ABC / The Washington Post called the lead stable. 'Libert Aryan 'presidential candidate Gary Johnson has 4 percent of respondents behind and Jill Stein of the Green Party 2 percent.