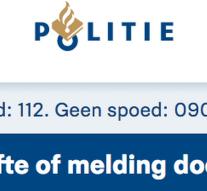 amsterdam - The website of the police (politie.nl) for the second year in a row elected Website of the year. The team that makes the website was therefore Thursday evening an awards ceremony in Amsterdam.

The online public election was initiated by online market researcher MetrixLab and magazine Emerce. Police. en was most appreciative of the voters. In 24 subcategories prices were still awarded for best and popular website. A total of 892. 000 votes were cast.

Police. e has an average of 2.5 million visitors per month. The lists of missing persons and news are the most viewed. Erik Akerboom commissioner of police is proud of the price. ' It appears that we have managed to get digitally accessible in contact with the public, '' he replied.

The election experienced this year's tenth edition. The title was previously include to Google, Hyves and Tweakers.