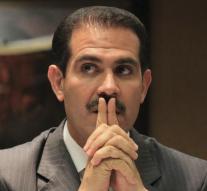 - The corruption accused former governor of the Mexican state of Sonora, Guillermo Padres Elias, would have laundered money via the Netherlands. Reported that the Mexican newspaper El Universal.

In total, it would involve a sum of $ 8.8 million, Padres including through the company Dolphinius C. V. has laundered in the Netherlands. The money, according to the Mexican public prosecutor from bribes.

Padres gave himself up Thursday to the authorities. He says not guilty to have made to money laundering, tax evasion and embezzlement, in which he is suspected. He is currently in a prison in Mexico City.